PVT is considered as one of the early pioneers of hard coatings by PVD-processes, in particular using the arc evaporation with large area evaporators.

The complete PVD-process starts with putting the pre-cleaned (by aqueous solution) parts into the pre-heated vacuum chamber. Thereafter a fully automatic process runs through the following steps:

During arc evaporation the magnetically guided arcs are run over the coating material (target), being e.g. Ti, AlTi, AlCr, TiSi etc. The arc causes a nearly 100% ionization of the evaporated material. The ionized metal vapor recombines with the reactive gases, such as Ti + N (nitrogen) > TiN (Titaniumnitride). Due to the high intrinsic energies and the extremely good throwing power of the arc-evaporation process very well adherent coatings can be uniformly deposited, even on complex-shaped, 3-dimensional substrates (parts and tools), while single, double and triple rotation of the parts support the uniform deposition.

Depending on the application different process are used, such as arc evaporation with

The processes are designed that the arcs are uniformly run over the targets to control and minimize the number and size of the micro-droplets and to maximize the target utilization.

To achieve this the PDA (Plasma Diffused Arc) and the HiParc (High Power Pulsed Arc) processes were developed, where the arcs are highly diffused and arcs are used in high power pulsed mode. The principle of the process is displayed in the sketch below. 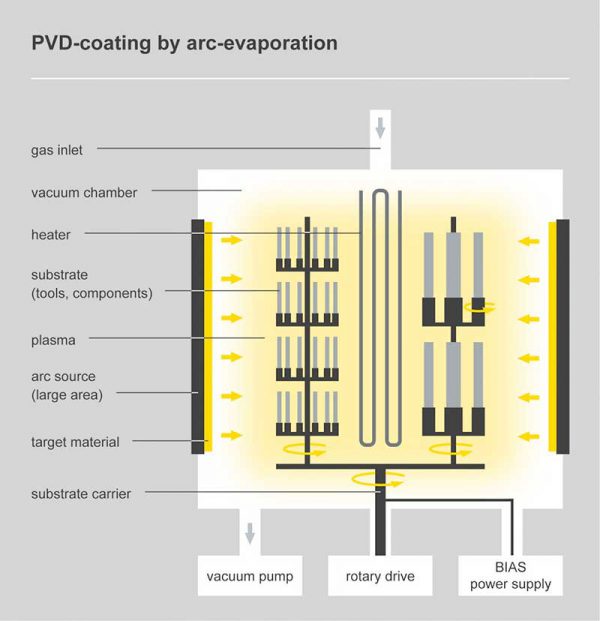 Magnetron sputtering (aka sputtering) is a process where the transfer of the coating material into the vapor phase is done by an argon ion bombardment of the coating material and releasing this way coating atoms from the target, partially ionizing them and depositing, while recombining with the reactive gases, such as nitrogen, to the desired coating material on the electrically biased substrates. Due to the low intrinsic energy of this process and the limited throwing power the distance between the substrate and the magnetron sputtering source is significantly smaller than with arc-evaporation. The formation of micro-droplets can be avoided depending on the magnetron sputtering process. The principle of the process is displayed in the sketch below. 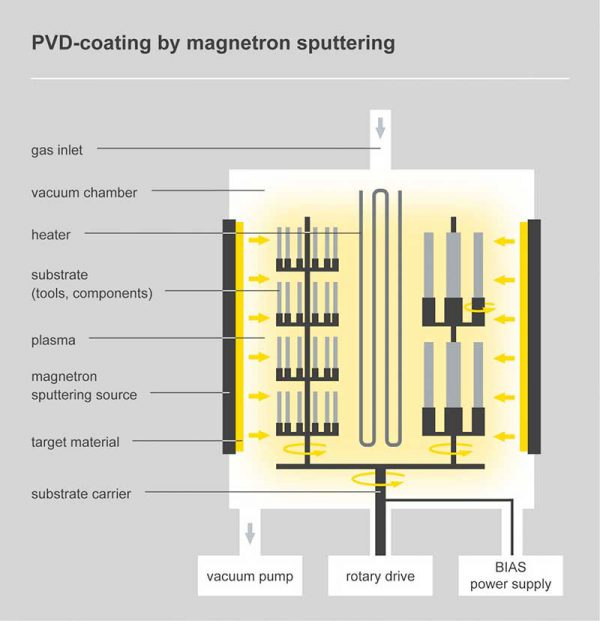