PVT Plasma und Vakuum Technik GmbH has its focus on the development of ion and plasma-assisted vacuum coating technologies, particularly on following processes:

However, should customer applications require, also combinations of different processes might be used, such as

The application of such process combinations will only be applied as long as the advantages for the customers prevail concerning the lifetime and the longevity of the coated parts, taking into account the total cost.

PVT is considered as one of the early pioneers of hard coatings by PVD-processes, in particular using the arc evaporation with large area evaporators.

The complete PVD-process starts with putting the pre-cleaned (by aqueous solution) parts into the pre-heated vacuum chamber. Thereafter a fully automatic process runs through the following steps:

PVD describes a variety of vacuum deposition methods to deposit thin films and coatings. These methods are characterized by processes in which material is transferred from the solid phase into the vapor phase and then back to thin solid films.

Arc evaporation or magnetron sputtering are used to transfer the coating material from the solid phase into the vapor phase for deposition. PECVD is a third method where gases are fed into the vacuum chamber from which the coatings are synthesized.

When using a PECVD-process, as with CVD (Chemical Vapor Deposition), only gases are used. For PECVD the deposition temperatures are considerably lower (100–600 °C) compared to the classical CVD with temperatures in the rage of 1000 °C and higher. The plasma is used to enforce the reaction as well as the dissociation of the reactive gases, such as C₂H₂ or CH₄ during the deposition of DLC (Diamond Like Carbon) coatings. 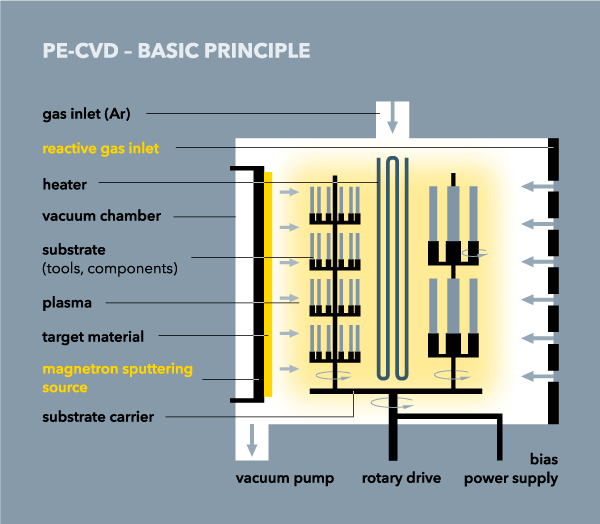 Also combinations of processes such as

To deposit well adherent DLC-coatings adhesive layers have to be deposited prior forming DLC. Cr (Chromium), deposited by arc evaporation, is an excellent candidate to improve the adhesion of DLC. 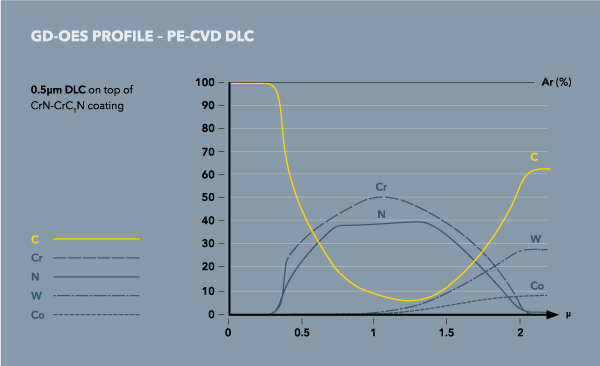